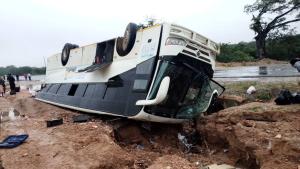 A Zimbabwe United Passengers Company (ZUPCO) bus overturned near Mushagashe in Masvingo on Monday morning when its driver allegedly attempted to overtake a small vehicle that was also trying to overtake an Inter-Africa bus.

The small vehicle was sandwiched between the two busses racing in road lanes meant for just two vehicles.

The busses were reportedly racing for passengers at Mushagashe. The small vehicle did not stop after the accident occurred.

The publication reported sources as saying there were no serious injuries following the incident.

The ZUPCO bus driver was speeding and he tried to overtake at the same time the small vehicle was also attempting to overtake the Inter Africa bus.

Someone somewhere 5 months ago

ZUPCO is not a driving school my friend

How did you, he was a leaner ZUPCO drivers are given,a Permit to drive papa, so maybe he,was just learning the ROAD

Travelled a long distance journey with Zupco last week.Realised half way thru the journey that the driver was a learner as he disembarked just before a roadblock and let the real driver take over.

US$0 Harare
chimuti 5 months ago

What is this 'small vehicle'?...Honda fit?

It was me.just a small vehicle.