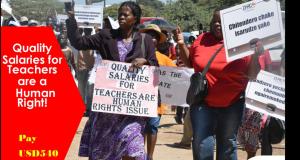 The Zimbabwe Teachers’ Association (ZIMTA) has called for sincerity in addressing teachers’ concerns ahead of schools opening on 7 February.

Teachers have been calling for the restoration of their October 2018 salaries when they were being paid about US$518. They currently earn an equivalent of just above US$100.

ZIMTA statement is issued as the government is meeting with workers’ representatives to discuss salary issues that have been on the agenda since two years ago. Pindula News presents ZIMTA’s statement:

Teachers from public schools have cried foul over high transport costs and lack of or insufficient transport allowances from the employer that should enable them to safely travel back to their stations which they had temporarily left due to the Covid-19 restrictions. Many have also cited incapacitation due to inflation hit RTGS salaries.

The teachers’ unpreparedness for schools opening comes on the heels of an announcement from the government that all schools re-open on the 7th of February next week.

A survey conducted by Zimbabwe Teachers’ Association (ZIMTA) has revealed that teachers may not afford to travel to their respective work stations due to paltry incomes and high transport costs.

Contacted for a response the Acting Secretary-General, Goodwill Taderera confirmed that the biggest union of teachers in Zimbabwe was running marathon meetings to consult far and wide in order to consolidate its union position ahead of February 7 2022. However, in some interviews with school teachers, ZIMTA heard that some teachers were in urgent need of capacitation and transport cushioning from the employer.

A Matebeleland based teacher, Isaac Siyamahila said he could not cater for his travelling costs back to his station.” Myself and my colleagues, we are not ready for schools opening because some have to travel from different places for example, from Chimanimani to Binga and its very difficult because transporters demand forex which we don’t have. The USD75 that was said to be paid is very difficult to access, if you get to access it traveling is very difficult. We need some government cushioning.”

Mr Bhebhe, a teacher also in Matebeleland, said government must consider looking at the plight of teachers and offer meaningful salaries. He said,”We are not ready for schools opening because a review of salary remuneration and conditions of service remain a mammoth task. If only something could be done by government to alleviate our plight because as l speak now the USD75 and the salary is not enough. Government must intervene to protect the dignity of the learners and teachers because as it is we are stressed as we do not know what will happen next.”

Speaking in an earlier interview, Acting Secretary-General, Mr Goodwill Taderera urged government to be more considerate when it comes to teachers’ welfare.

“The current bread basket according to Consumer Council of Zimbabwe stands at $72 967 while ZimStats PDL stands at $48 046. All these figures are way above what the ordinary teacher is currently earning. Therefore we demand that government be more sincere in ensuring educators earn a decent living wage,” He said.

Government has announced that schools will re-open on the 7th of February 2022.

I agree with you Dury. Honestly a cabinet laughing at a joke of that nature,if it was a joke at all.We would expect a heated debate about such trush from a mature parliamentarian.CRY MY BELOVED COUNTRY.

That is what you get for being a civil servant,kushandira nyika kkkkkk if they don't like the wages change profession as simple as that. Personally I don't sympathize with the plight yemateacher because vanotibira isu maparents when they indulge in extra lessons at the end of the day ndisu maparents who are getting a raw deal ....

Uyu unozviti Captain is an example of a failed life, failed future, he wants everyone to suffer just because he knows there's nothing more to his life than seeing others making it. My guy don't blame us for wanting what's rightfully ours. It's our right to get a fair share of pay for our work. Just because you have failed in life, it doesn't necessarily mean everyone has to. I feel for you. Ummmmm

Report Abuse
Me 3 months ago

Directly or indirectly,. One works for a country Mr Captain
However nyaya iripo is pane mismanagement of economy that is forcing poor remuneration of direct Gvt workers thereby forcing yo claims ekutorerwa Mari..
But bigger Qtn to be answered is ARE THE MAJORITY OF CITIZENS GETTING QUALITY EDUCATION AS WE WISH? IS THIS THE TEACHER'S FAULT

What does one expect from a gvt whose permanant secretary of education advises trs to borrow money to go back to sch and then the whole cabinet laughs.Seriously sicela ama leaders a mature

US$0 Harare
The Terraces 3 months ago

I think the teachers should ask for a reasonable amount the USD518 which they are requesting from the government they will not get.

Sure teachers deserve better. Yesterday l bought a grocery worth $US50 for my kid's teacher just to appreciate him.

Individuals who are not sincere should be exposed. There is no need for mature adults to go round in circles due to the insincerity of a few individuals. Expose and challenge such individuals to make room for sincere individuals. Some issues take too long to solve or remain unsolved due to people who are placed in positions too big for them and they cover this up with being insincere so they appear tough on the outside

Senge Mai avo vakuseka having last time while announcing publicly kuti xuls were to open.... Teachers must borrow bus fare to return to work 🙄🙄🙄🙄
Zim Education is doomed under such people

Gvt pliz do something nema teachers aya they deserve better...at lst vapeiwo $400 and above