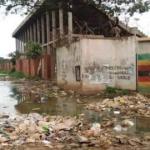 The Zimbabwe Football Association (ZIFA) Grounds Committee, has painted a sorry picture of the country’s stadia ahead of the new season.

The Committee has started the inspection of the facilities used by the top-flight clubs around the country.

Local CAF Club Licensing Manager, Xolisani Gwesela, who is also part of the ground inspection team, on Friday painted a depressing picture of the condition of the stadiums. He said:

We have since started the inspection of the local stadiums in preparation for the new season and the undeniable truth is that we are facing a national crisis.

All our stadiums are in bad shape and in dire need of renovation.

It is a big worry when none of our stadiums meets the minimum requirements by CAF.

We need to come up with a blueprint on how we should move forward from this.

He said the stadiums need to be modernised as most of them were built in the 1970s and 1980s and no longer meet modern standards.

Gwesela, who is ZIFA spokesperson, warned that if nothing was done to the National Sports Stadium, in the next few months, Zimbabwe would be forced to play home matches in other countries.

There is nothing sanctions in zim that's the results of mismanagement by these uneducated ,thugs , culprits elements