Zimbabwean Man Sentenced To Death For Murdering His Employee 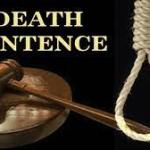 A High Court judge Monday sentenced a Hwedza man to death for the murder of his employer in 2015 and throwing the body into Rhodesville Dam.

Tapiwa Murombo was yesterday found guilty of the premeditated murder of Partson Musarandoga whose body was found in the dam days after he went missing.

Murombo allegedly struck Musarandoga on the head with an axe at a farm along the Hwedza Highway, forged a suicide note directing him to sell properties from the deceased’s home and disappeared.

The police pursued him along the Harare-Chirundu Highway in a high-speed chase, shot him in the leg as he tried to escape and eventually arrested him.

Murombo denied killing Musarandoga saying he parted with him after the deceased had agreed to give him a vehicle as payment for a US$4 000 debt.

The court finds that the reasons advanced were not such as to convince the court not to pass the death sentence. In essence, after taking all factors into account, this court finds that there are no circumstances of a mitigating nature that would call for a lesser sentence.

Neither a life sentence nor a sentence of not less than 20 years will meet the justice of the case.

The accused shall be returned to prison, be held until the execution of the sentence according to law.

She said  Murombo was not in the group that is excluded from the death sentence as stipulated by section 48(2)(c) of the Constitution.