Zimbabwean-born Nuclear Scientist Publishes Book On The Existence Of Souls 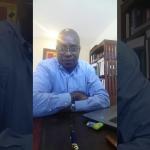 Manzira, who resides in South Carolina, has transitioned from being a computer engineer to a nuclear scientist in the last five years and is currently finalising a PhD in nuclear engineering. He said:

Proving that an invisible microsphere can carry intelligible data equivalent to that of the average human brain gives plausibility to the idea that human beings have souls.

This proof was achieved through a scientific experiment that quantified the number of electromagnetic particles in a 1.73nm diameter sphere.

With that premise, the book traces the author’s life going from childhood to the current with a bearing of the influence and participation of religious activities.

It takes the reader into the mindset of a doubter who questioned belief in Christianity and used scientific reasoning to accept Christianity.

It then takes the reader through the explanations inferred from the existence of souls on the actions they take in life phenomenon where such actions are normally attributed to spiritual effect or miraculous occurrences.

Arguments are forwarded to dispel other researchers’ opinions about the so-called evidence against the existence of a human soul.

Manzira’s new book was published by Christian Faith Publishing. It can be purchased at traditional brick & mortar bookstores, or online at Amazon.com, Apple iTunes store, or Barnes and Noble.

Reply Report Abuse
So what? 5 months ago