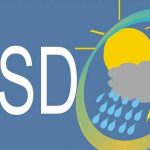 Cloudy and humid conditions over the country resulted in scattered thunderstorms and rain yesterday.

Isolated thunderstorms are expected in provinces such as Masvingo, parts of Midlands, Bulawayo Metropolitan and all Matabeleland provinces with brief cloudy periods and warm to hot daytime conditions.

All other areas (parts of Midlands, Manicaland, Harare Metropolitan and all Mashonaland provinces) should have scattered clouds with warm to hot daytime conditions. It should be mild in the morning and evening with a predominantly north-easterly airflow.

Mostly cloudy and warm daytime conditions with scattered afternoon thunderstorms are expected across the country. It should be mild in the morning and evening.