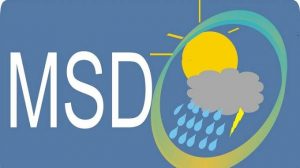 The Moderate Tropical Storm “ANA” made landfall yesterday over the north coast of Mozambique and dumped a lot of moisture in northern Mozambique before evolving into an Overland Depression.

Since then, the Overland Depression has been moving westward; and as of today afternoon, its centre was over the northeastern parts of Zimbabwe, near Cahora-Bassa.

This Overland Depression is moving westward along the Zambezi Valley, causing heavy rain along its path.

However, the extent of its cloud cover and moisture covered much of the country with heavier falls along the Eastern Highland due to orographic rainfall under the influence of a south-easterly airflow.

Heavy rains (in excess 50mm) and strong winds are expected in Mashonaland West and Manicaland Provinces.

Harare Metropolitan Midlands provinces, Bulawayo Metropolitan, Masvingo and all Matabeleland provinces; are anticipated to have light rains and moderate to strong winds.

It should be mostly cloudy and mild across the country.

Localized heavier falls (above 30mm) remain probable especially in parts of Manicaland and Mashonaland West provinces due to remnant moisture.

Thanks for the weather update.