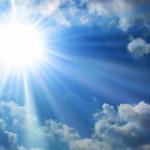 A cloud system affecting the western parts of the country resulted in isolated thunderstorms in all Matabeleland, Bulawayo Metropolitan and parts of Midlands provinces, where Bulawayo had the highest fall of 45mm. The rest of the country was mostly sunny and hot.

Matabeleland North and South, Bulawayo Metropolitan, parts of Midlands and Masvingo provinces are expected to be partly cloudy and hot with a chance of afternoon isolated thunderstorms.

All other areas (all Mashonaland , Harare Metropolitan, Manicaland and parts of Midlands provinces) should be mostly sunny and hot with mild morning and evening temperatures.

The cloud system coming from the west of the country is expected to strengthen giving us partly cloudy conditions with scattered thunderstorms in all Matabeleland, Bulawayo Metropolitan, southern parts of Midlands, Masvingo and southern parts of Manicaland provinces.

All other areas (Harare Metropolitan, all Mashonaland, northern parts of Midlands and Manicaland provinces) should expect mostly sunny and hot conditions.

Yes Cobra is right. Let's pray for our country to have some more rains and no drought.