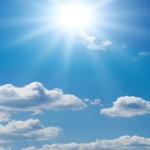 It was partly cloudy across the country with isolated thundershowers being recorded in all Matabeleland Provinces, Bulawayo Metropolitan and Manicaland provinces.

The highest falls recorded were at Kezi (7mm) and the rest were insignificant.

Meanwhile, a cloud band over Botswana continues to feed moisture into the western parts of the country.

The rest of the country should be mostly sunny and hot to very hot during the day. All areas will be mild in the morning.

Other provinces (Harare Metropolitan and all Mashonaland ) should be partly cloudy and hot with a chance of isolated thundershowers.