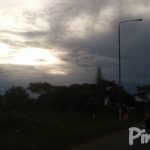 PREAMBLE: Out of the thunderstorms that occurred over the country yesterday, some of the highest rainfall amounts were 48mm (Seke Ward 1), 42mm (Southerton, Harare), 40mm (Rothwell Farm, Norton), 35mm (Mukandi) and 34mm (Masvingo). Meanwhile, more moisture is slowly infiltrating the country from both Botswana and Zambia.

Generally, light showers are expected across the country with a predominantly north-easterly airflow; however, localized heavy rains remain probable especially over Matabeleland North, Bulawayo Metropolitan and Matabeleland South. It should be partly cloudy and mild at first becoming cloudy and warm as the day progresses.

• Lightning and hailstorms are a major risk during this period.

• Strong winds may blow off roofs and damage property.

• Most thunderstorms occur between mid-morning and evening hours, with afternoons being peak period.

• When thunder roars, go indoors. Stay indoors for at least 30 minutes after the thunderstorms have ended. These are precautionary measures to reduce the chances of being struck by lightning.

• Note that lightning can strike from a large distance; thus if you can hear thunder within 30 seconds of seeing lightning, then you are close enough to get struck. Go into a vehicle or a house.

• Do not ride at the back of an open vehicle or ox-drawn cart during a thunderstorm.

• Insure crops against adverse weather such as hailstorms.

A wet start of the year is expected on SATURDAY 01 JANUARY 2022 over Manicaland, Harare Metropolitan and all Mashonaland Provinces with mostly cloudy skies and scattered afternoon thunderstorms. Isolated showers are anticipated in Matabeleland North, Matabeleland South, Bulawayo Metropolitan, Midlands and Masvingo Provinces. All areas should be mild at first becoming warm by afternoon with wind gusts towards evening.