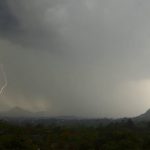 The cloud band which came from the western side of the country caused scattered thundershowers on the west of the country and along the main watershed. The highest amount was recorded in Victoria falls (19mm) followed by West Nicholson (9mm) and Gweru (4mm). Meanwhile, convergence is expected across the country as pressure is rising on the southeast coast of South Africa.

• Cold conditions in the early hours of the morning have negative impacts on poultry and some crops.

• Low temperatures may affect the health of all persons. however persons of an ill disposition. the elderly and young children tend to be more vulnerable.

• COVID is still a potential threat. stay safe. mask-up. get vaccinated. If one is dependent on solar, ensure the load is minimised when charging is not optimal.