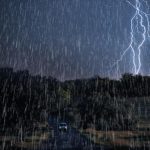 Thunderstorms occurred in Matabeleland North, Matabeleland South, northern parts of the Midlands, Harare Metropolitan, and all Mashonaland Provinces. However, the precipitation amounts across much of the country were suppressed to below 10 mm, except in areas such as Mvurvvi which had a downpour (152mm), as well as Concession (51mm), Chakari (43mm), Chegutu and (31mm), with a south-easterly airflow driving the active storms slightly northward.

Mostly cloudy and warm afternoon conditions coupled with scattered afternoon and evening thunderstorms are expected in Mashonaland Central, Mashonaland West and northern districts of Matabeleland North. It should be mild both morning and evening. All other areas, namely Manicaland, Mashonaland East, Harare Metropolitan, Midlands, Bulawayo Metropolitan, Matabeleland South and Masvingo Provinces should be mostly sunny and warm for much of the day; however brief cloudy periods and isolated showers remain probable. Mild morning and evening conditions are anticipated.

• Heavy rains may give rise to flash flooding leading to treacherous road conditions.

• Visibility may also be compromised during heavy storms.

• Some dams (including Tokwe-Mukosi) are 100% full, this can cause downstream flooding should the dams overspill.

• Do not cross flooded rivers and swollen streams whether on foot or in a vehicle as just 30cm of flowing water is enough to sweep away a vehicle.

• Avoid driving on a road covered by water especially at night or during downpours when it is more difficult to recognize flood dangers. Even if no heavy rains have occurred in your area, they may have occurred up-stream

• Be ‘Weather-ready; always plan with the weather in mind.

Northern districts of Matabeleland North, northern parts of the Midlands, Harare Metropolitan and all Mashonaland Provinces: Isolated thunderstorms are anticipated with mostly cloudy conditions prevailing. Mild at first becoming warm by afternoon. Manicaland, southern areas of the Midlands, Bulawayo Metropolitan, Matabeleland South and Masvingo Provinces: It should be windy and mild with scattered clouds for much of the day. Brief cloudy periods are expected in districts such as Beitbridge, Chiredzi and Chipinge.