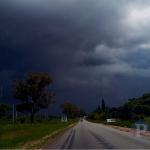 Scattered thunderstorms and rain occurred in Matabeleland North, northern areas of Midlands, all Mashonaland Provinces, and Harare Metropolitan Province. Some of the precipitation (rainfall) amounts were 40mm (Bindura), 23mm (Chibero) and 22mm (Chinhoyi). There were isolated rain showers in the southern areas (Manicaland, Masvingo, South of Midlands and Matabeleland South provinces).

Cloudy and warm weather with widespread rain showers which could be thundery is expected in Matabeleland North, northern areas of Midlands, all Mashonaland Provinces, and Harare Metropolitan Province. Localised downpours (in excess of 30mm) remain probable. Isolated thundershowers are expected over Bulawayo Metropolitan, Matabeleland South, southern parts of Manicaland and Midlands and Masvingo Provinces. It should be mild in the morning and towards the evening.

• Clearance of waterways and drainages, ahead of time, helps reduce the impacts of heavy rains.