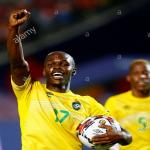 Zimbabwe Warriors defeated Guinea 2-0 in their final match of the Africa Cup of Nations Cup (AFCON) finals underway in Cameroon.

The Warriors got the goals from captain Knowledge Musona and Kuda Mahachi while Liverpool forward, Naby Keita pulled one for Guinea.

The Southern African country is, however, already out of the tournament after losing its first two Group B matches, 1-0 against Senegal and 2-1 against neighbouring Malawi.

Zimbabwe bows out of the tournament with 3 points and only three goals from Ishmael Wadi (against Malawi), Knowledge Musona and Kuda Mahachi (against Guinea).

Senegal tops the group with five points followed by Guinea which has 4 points while Malawi also has 4 points.

Malawi is now third after considering the head-to-head against Guinea. The Flames lost to Guinea 1-0 when the teams played each other.

Zimbabwe finishes at the bottom of the group.

i have no idea hw they select the players who represent the national team but some of the players surely dont deserve to be anywhere near the warriors colours its better to go there with locally based those guys have something to prove, avo ana benyu nana muskwe chero team ikadyiwa 10-0 they will fly back to england hazvimbova affecta how on earth someone playing zvima farm league ku europe playing ahead of someone arikutamba week in n out at top flight level here in africa

This is our fifth ediction at Afcon and if my memory saves me well, we had been bowing out in the same style. Loosing the 1st two matches and winning the last game.i smell a rat guys, it seems as if we sell games. The way we conceeded against Malawi leaves me with more questions than answers. 1 Radebe made a false jump on the first goal. 2 on the second goal he was dispossessed whlist in total control of the ball.3 we had to fight tooth&nail against Guinea so as to allow Malawi to gain progress alas as one of the best 3rd placed team. I opine that we have some players who wake in cohorts with coaches and zifa officials to fix games🤷

Mapeza akadyisa team pama games 2 ekutanga poor team selection yaakaita ,we could have won those 2games or drew and our team should have progressed to next stage,we have good players but the coach and his assistants did let us down

US$12.00 Chitungwiza
Zimyouth 4 months ago

Mr Bright you are a good fan of football I was lost ,thank yu

Mr Bright ,we have two players at born mouth Zemura ,so is Bourne

Next time put the best players like Mahachi and Prince in time don't use the formless and tired players.

We have got a lot of talent ,I always say politicians are e one letting us down ,for instance just imagine ,after Zimbabwe have qualified fr afcon someone begin to frame ,allegations of corruption to ZIFA board ,this let down e spirit of wanna be ,aboard players like Borne of Bonmouth and many more ,money mongers ,politicians are a disgres to our nation

Nothing to celebrate when we are packing our bags and returning home. Useless win.

Despite being in 4th place, Zimbabwe can still go through to the knock out stages if Senegal and Malawi players get angry and beat up the referee. CAF and FIFA will immediately expel them from the tournament. That means guinea will now top the group and Zimbabwe will be second.

Yes, we won... In retrospect though.... This afcon edition wasn't that bad... We only played badly against Malawi

If it was that good we wouldn't beat the bottom of the table fool.