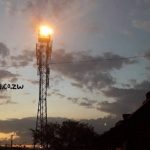 Electricity supplies could improve in the near future as the government plans to import more power from neighbouring Zambia and Mozambique.

Load shedding moved up into a new level at the weekend with most residential suburbs now enduring power cuts ranging up to 12 hours, and sometimes longer.

Zimbabwe has opened negotiations for new power supply deals with Zambia and Mozambique which could see the country importing a total of 280 megawatts from the two countries, reported The Herald.

A delegation from ZESA Holdings left on Monday for Zambia to have negotiations and returned yesterday where according to sources it had a fruitful engagement with ZESCO in Lusaka.

ZESCO runs hydro stations at Kariba North and Kafue and has indicated it could generate another 100MW for export through the inter-connector to Zimbabwe.

In an interview on Tuesday, Energy and Power Development Minister Zhemu Soda said Zambia has indicated that they have a surplus of 100 MW from the Kafue Gorge, which they could sell to Harare. He added:

Mozambique also told us that they have an additional 180 MW over and above what we are currently importing and these new two deals will give us an additional 280 MW. That should help us to reduce the deficit of between 200 and 300 MW.

Soda said the first unit of the new Hwange 300MW units is expected to be commissioned in July and the second in September.

Last week, Solgas, a private investor, started feeding 5MW from its small solar plant in the Matabeleland North Province onto the national grid.

ZZEE, a Chinese investor is also expected to start feeding 25MW from its small first stage of a new thermal power station in Hwange in the next few weeks while the Harava Solar Park in Seke is expected to be switched on before the end of this year, with an initial production capacity of 6MW. Said Soda:

The coming on stream of the new small power projects will help us to stabilise internal power supplies in the near future but our major breakthrough would be in July next year when we commission the first unit at Hwange.

Zimbabwe is targeting to add more than 2 000MW to the national grid mostly from renewable and cleaner sources including solar, wind and other sources by 2030.