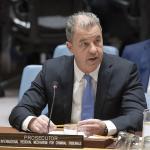 The Zimbabwean Government has pledged to fully cooperate with the International Residual Mechanism for Criminal Tribunals (IRMCT) in matters of investigations into the whereabouts of the Rwandan Genocide fugitives, The New Times reported.

The IRMTC took over the work of two United Nations (UN) courts, the International Criminal Tribunal for Rwanda (ICTR) and that of former Yugoslavia (ICTY), after the two courts were dissolved.

Addressing the UN Security Council during a session to update the council on the activities of the IRMCT on Monday 13 December 2021, Serge Brammertz, Prosecutor of IRMCT, said:

With respect to Zimbabwe, I undertook an official mission to Harare in early November, where I met with Vice President (Constantine) Chiwenga and other senior officials.

We discussed positive results achieved recently in our joint efforts, as well as key outstanding issues.

As a result of these discussions, I submitted a set of concrete recommendations on how to further improve our cooperation and reiterated our pending requests for vital information from Zimbabwean authorities.

While I have not yet received a response, I trust that in the coming period, I will be able to report that Zimbabwe is providing full and effective cooperation.

Zimbabwe has for a long time been accused of harbouring Rwandese genocide fugitives.

Among those being sought by the UN Court and believed to be hiding in Zimbabwe is Protais Mpiranya.

He is the former commander of the Presidential Guards who allegedly spearheaded killings mainly in Kigali during the Genocide against the Tutsi.

Mpiranya is considered by the UN court as “Big Fish” and whom the Mechanism insists it must try before it is dissolved, The New Times further reported.

The remaining five fugitives, including Flugence Kayishema, are believed to be in South Africa.

The ICTR laid charges against the five but their files were later handed to Rwanda.

This means that in case of their arrest, they will be tried in Rwandan courts.