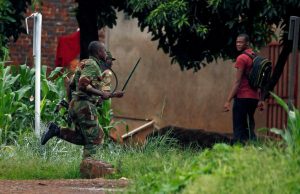 The Zimbabwe National Army (ZNA) has said its members were never engaged in taunts with imbibers over beer at Mbalabala Shopping Centre on Christmas eve. ZNA said the story was published by various online publications. Pindula News presents the ZNA statement on the matter:

Reference is made to the NewsHawks story titled ‘Soldiers Reportedly Assduit Villagers after Exchanging Taunts over Alcohol,’ published on 28 December 2021. The article was also published in other online publications. In the story, it is alleged that imbibers and soldiers exchanged taunts over beer at Mbalabala Shopping Centre on Christmas eve, resulting in the soldiers mobilising the police to attack residents randomly. The ZNA would like to put it on record that its members were never involved in the incident in question as they were never at that place. The business centre in question is strictly out of bounds to all our members.

The area is in a gold mining region where illegal gold mining activities are rampant. Investigations have revealed that the incident involved artisanal miners (Makorokoza) who were fighting amongst themselves. ZRP Esigodini reacted and dispersed the rowdy artisanal miners. The Army encourages Journalists to always check with the police to verify information and incidents before rushing to publish unverified stories.