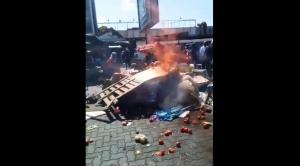 Zimbabwe’s Ambassador to South Africa, Mr David Hamadziripi Friday said the embassy has started engaging the host government to improve the safety and security of migrants who are facing attacks by groups in the neighbouring country.

This comes amid reports that migrants in suburbs around Gauteng Province have been given three days’ notice to leave their homes, while some are being forced to quit their jobs. In Soweto, foreign hawkers were evicted from the Bara Taxi Rank.

Ambassador Hamadziripi said although they were yet to come into contact with Zimbabweans affected by the potentially volatile situation, they were not leaving anything to chance. He said:

We have since made contact with the relevant authorities here through our consulate in Johannesburg.

The embassy is equally concerned with the reports we are getting and we are verifying the facts with the help of our hosts.

The whole idea is to ensure that they deploy the necessary agencies to deal with the safety and security of our nationals.

He said the consulate in Johannesburg was in the process of verifying some reports as shown in some videos circulating to the effect that some migrants were under attacks from local citizens.

A human rights activist, Ms Nobuhle Ajiti, said they have managed to secure alternative accommodation in the interim at local churches for affected individuals who are mostly from Nigeria, Mozambique and Zimbabwe.

Meanwhile, Zimbabwean Community in South Africa spokesperson, Mr Bongani Mkwananzi said they were yet to encounter their fellow countrymen who had been directly affected by the ongoing disturbances.

A South Africa-based Zimbabwean journalist, Mxolisi Ncube and the chairperson of the Zimbabwe Exiles Forum and Human Rights Lawyer, Advocate Gabriel Shumba agreed that politicians were the main driving force to attacks on migrants.

@Idhii👹☠️💀
pasutu wabhaiza wangu me i dont have time for that. dai wati chiwork suit chine madhaka i'ld think kuti uri next door wanu ane mafile ese.
pahembe yezanu apo, wapinda nemo nemo why shd i be ashamed to stand by whoever i support wgen all is well with me

@Tkt..iyo zanu yamunongoti zanu zanu mnomboiziva here.u benefit nothing from this zanu yamunotaura. Did u know the real pple who benefit from zanu hauvaone pano. You are shallow minded, thats why i told you uri mwana mdokosa. Garai pasi

Uka farisa i can prove it to you kuti wakatobva kuchinjawo kaVivo Y11 kanga unako atleast, thank ZanuPf has made you buy a new phone this week saka wanga wakati zii pese apa

THOSE WHO READ THE BUSH LAWYER'S COMMENTARIES REMEMBER ME AGITATING FOR THE STEPS OUR ESTEEMED AMBASSADOR HAS TAKEN.

I WAS CANVASSING FOR THE MEETING OF THE MINDS EITHER AT PRESIDENCY LEVEL OR AMBASSADORIAL LEVEL. I AM HAPPY THAT IT IS NOW HAPPENING.

I AM HAPPY TOO THAT SO FAR THE AMBASSADOR HAS NOT RECEIVED INFORMATION ABOUT ANY ZIMBABWEANS WHO HAVE BEEN AFFECTED.

Thank you gud pipo for trying to knock some sense into these light headed fools one day these fools will find the courage to call a spade a spade.