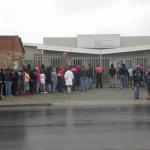 Zimbabwe has begun negotiations with South Africa over the Zimbabwe Exemption Permit (ZEP) arrangement after the neighbouring country said it would not extend them beyond December 31.

South Africa’s Cabinet gave ZEP holders a 12-month grace period to apply for other permits or risk being deported.

The announcement has caused panic among several thousands of Zimbabweans who are ZEP holders.

In a statement yesterday, Zimbabwean ambassador to South Africa, David Hamadziripi said negotiations had started between the two countries.

Hamadziripi said they would urge their South African counterparts to disseminate information on time as such decisions impacted the livelihoods of thousands of people. He said:

The government of the Republic of Zimbabwe urges and encourages all its nationals, beneficiaries of the special dispensation, to comply with this decision and to co-operate in its implementation.

At the beginning of the programme 12 years ago, 300 000 people applied for the Dispensation of Zimbabwean Permit, which provided for the documentation of qualifying Zimbabweans for a five-year period.

They then renewed them under the Zimbabwean Special Dispensation permit in 2014.

Over three million Zimbabweans are believed to be in South Africa, a huge number being undocumented.