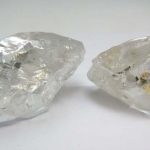 Gems from the Marange diamond fields have been excluded from big international markets under a damaging global embargo announced by the European Union (EU) and the United States at various intervals in the past decade.

The two power blocs have cited security forces’ brutality against defenceless diamond panners in the Marange claims and the deployment of forced labour as reasons behind their hardline stance.

Zimbabwe says it wants to turn to its natural resources to bridge a financial crisis which some analysts attribute to high-level economic mismanagement and corruption.

Last week, they also requested the UN special rapporteur on the negative impact of the unilateral coercive measures on the enjoyment of human rights Alena Douhan to negotiate for the resumption of trade in ivory.

In the paper titled “Economic Impact of Sanctions on Zimbabwe,” POLAD criticised the West for worsening Harare’s crisis by blocking “access to markets for Zimbabwe’s diamonds sector” and precipitating “disinvestment, company closures and a currency collapse”.

Zimbabwe is estimated by some experts to be endowed with 25% of global diamonds stocks but there has not been tangible benefits from the gems amid reports of looting in the mines.

In an interview with the Independent, POLAD chairperson for the economic thematic committee and CODE president Trust Chikohora confirmed the grouping’s campaign to have the ban lifted. Chikohora said:

We told her that Zimbabwe is not allowed to sell its diamonds on the international markets like Antwerp in Belgium. We only invite buyers here when we conduct our auctions. Only a few buyers who are not afraid to have their names dragged into the mud come. We only receive about 30 to 40 of them. Because of low demand, prices are very low compared to what we would earn if we were to sell on the international markets. We are losing revenue.

Remember that during the time when Obert Mpofu was the Minister of Mines they wanted to declare them ‘blood diamonds’. But Zimbabwe is not at war. Mpofu had to fight hard.

Zimbabwe’s government has argued that with diamond sanctions and trade in ivory frozen, Harare’s economy has been deliberately destroyed to create a humanitarian crisis.