Zim Engages Mozambique Over The Repatriation Of Cyclone Idai Victims 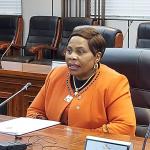 The Government of Zimbabwe has engaged Mozambique in a bid to repatriate the bodies of Cyclone Idai victims.

Addressing journalists during a post-Cabinet briefing in Harare on Tuesday, Information, Publicity and Broadcasting Services Minister Monica Mutsvangwa said Zimbabwe is ready to send officials to Mozambique to help in the process of repatriation. She said:

Zimbabwe requested Mozambique for its cooperation in the repatriation of the remains of Zimbabweans who were washed away by the floods that were caused by Cyclone Idai and buried in Mozambique.

Zimbabwe expressed its readiness to send a delegation to Mozambique at the earliest convenience to assist in the process.

In this regard, the Commission resolved that Zimbabwe would submit to Mozambique a draft MoU on Disaster Preparedness and Mitigation which incorporates a mechanism for dealing with post-disaster situations, including repatriation of remains.

Cyclone Idai claimed the lives of hundreds of people in Manicaland province in 2019 and some of the bodies were washed downstream by floodwaters and deposited in Mozambique.

The Mozambicans retrieved the bodies and buried them as it was logistically difficult to bring them to Zimbabwe for decent burials.

The tropical cyclone left a trail of destruction in Manicaland and parts of Masvingo Province resulting in deaths and displacement of hundreds of families.

MAY I PERSONALLY THANK OUR GOVERNMENT FOR ENGAGING MOZAMBIQUE GOVERNMENT WITH THE AIM OF WANTING TO REPATRIATE BODIES OF ZIMBABWEANS WHO WERE BURIED IN MOZAMBIQUE.

BUT WHY DID IT TAKE SO LONG TO TAKE THIS SIMPLE DECISION ? IT IS NOW ALMOST TWO YEARS SINCE CYCLONE IDAI RAVAGED MANICALAND, PARTICULARLY CHIMANIMANI AND CHIPINGE.

HOW ARE THEY GOING TO IDENTIFY AND CONNECT THESE REMAINS WITH THEIR RELATIVES ? YES PERHAPS, THEY WILL ARGUE THAT THEY WILL DO IT THROUGH DNA. THIS PROCESS IS TOO EXPENSIVE.

FAITH IS BEING SURE OF WHAT WE HOPE FOR AND CERTAIN OF WHAT WE DO NOT SEE. [HEBREWS 11:1]