"Zim Dollar’s Second Death Only A Matter Of Time" 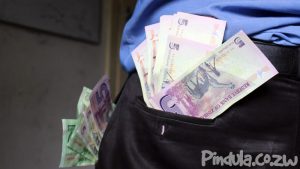 Some economic analysts believe that the Zimbabwe dollar will be demonetised in the foreseeable future as more and more transactions are being done using the United States dollar.

According to Bloomberg, when Nigel Chanakira, founder and former CEO of now-closed bank Kingdom Financial Holdings Ltd, asked 100 chief executive officers at a seminar in Harare on 27 January if they were willing to use the local currency, only one raised his hand.

The lone defender of the Zimbabwe dollar at Chanakira’s meeting was Alois Burutsa, the general manager of Buy Zimbabwe, an organisation that promotes local goods.

In an interview with Bloomberg, Burutsa said that “without our own currency, our exports become uncompetitive.”

Zimbabwe abandoned its currency in 2009 due to hyperinflation and adopted a multi-currency regime that was dominated by the US dollar.

In June of the same year, the RTGS dollar was rechristened the Zimbabwe dollar and the use of foreign currency was briefly banned.

Restaurants and supermarkets are now offering huge discounts when customers purchase goods in US dollars.

The government itself paid civil servants their 2021 bonuses in US dollars, and ZIMRA collects a third of its income in greenbacks.

While inflation slowed from a 12-year high of 837% in July 2020, it was at 61% in January, still rapidly eroding the value of the local unit. Said Chanakira:

We can’t deny the reality. When you get the Zimbabwe dollar you spend it quickly. No one wants to save in that currency.

Both Reserve Bank of Zimbabwe Governor John Mangudya and Finance Minister Mthuli Ncube both insist that the country is not dollarising.

But Gift Mugano, executive director at Africa Economic Development Strategies, a Harare-based consultancy predicts the Zimbabwe dollar “will be in the graveyard” by June. He said:

Dollarization is the ultimate outcome of a failed economic policy.

Chanakira was more optimistic: he said the local currency could survive for another two years.

US$0 Harare
ITAI ZVAMANGAMUCHIITA 3 months ago

GOOD MONEY DRIVES AWAY BAD MONEY IN SIMPLE ECONOMICS TERMS.THE USD IS TOO GOOD A CURRENCY.GVT SHOULD HAVE OR SHOULD ADOPT THE RAND UT IS MUCH SUSTAINABLE LOOK AT NAMIBIA

U are certainly right we should

I PERSONALLY AGREE WITH EX FINANCE MINISTER, ADVOCATE TENDAYI BITI, AND MANY OTHERS WHO SAY THE DAYS OF ZIMBABWEAN DOLLAR OR RTGS ARE NOW NUMBERED.

AS I WRITE THIS CHAT US$1 :240 RTGS IS THE EXISTING RATE ON THE BLACK MARKET. THIS IS UNACCEPTABLE AND UNATTAINABLE.

TO SHOW THAT THE US$ IS GNAWING THE ZIMBABWEAN RTGS BIT BY BIT, IS THE FACT THAT EVEN GOVERNMENT IS NOW CHARGING FOR SOME OF ITS SERVICES IN US$.

RTGS IS GOING TO DIE A NATURAL DEATH. MOST COUNTRIES WHO AT ONE TIME ABANDONED THEIR CURRENCIES IN LIEU OF US$ HAVE FOUND IT DIFFICULT TO GO BACK TO THEIR CURRENCIES. THEY HAVE EITHER CONTINUED WITH THE USA DOLLAR OR THEY HAVE USED PARALLEL CURRENCIES.

ZIMBABWE CHOSE TO USE PARALLEL CURRENCIES, BUT HAS FAILED TO CONTAIN BLACK MARKET.

[ ZIMBABWEAN DOWNFALL IS ITS FAILURE TO CONTAIN BLACK MARKET ].