ZIFA Still To Engage Billiat Over Decision To Quit Warriors 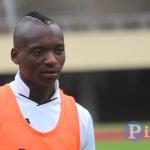 Zimbabwe Football Association (ZIFA) general manager for national teams, Wellington Mpandare said that they are yet to engage Kaizer Chiefs winger Khama Billiat to try to persuade him to rethink his decision to quit the national team.

Billiat (31) announced last month that he was retiring from international football and since then, ZIFA has been making frantic efforts to convince him to change his mind.

Mpandare told State media on Saturday that they could not travel to South Africa to meet Billiat after his club Kaizer Chiefs went into a bio bubble following a COVID-19 outbreak. Said Mpandare:

Unfortunately, we couldn’t go to South Africa to meet up with Khama (Billiat), after the COVID-19 at Kaizer Chiefs, the players went into a bubble, especially Khama and Dolly (Keagan).

So, we could not go to meet him when he was in a bubble so we wait to hear after the weekend game then we see if we can just fly there or just conclude the negotiations over the phone, hopefully by Monday, something would have come up.

The Warriors will be without Brendan Galloway, Marvelous Nakamba and Marshal Munetsi at the belated 2021 Africa Cup of Nations (AFCON) finals owing to injury.

Bournemouth’s Jordan Zemura and Prince Dube of Azam are back to full fitness and expected to be part of the Warriors squad for AFCON.