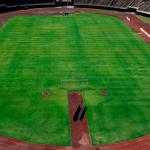 The National Sports Stadium (NSS) will be banned from hosting senior teams’ international matches and other CAF Men’s Inter-Club Competitions after the Warriors’ final 2022 FIFA World Cup qualifier against Ethiopia to be played in November.

The stadium was inspected by the Confederation of African Football (CAF)’s Tshegofatso Moiloa on 13 and 14 October and its temporary approval will expire next month.

The ban will be in place until outstanding issues noted in previous reports have been addressed.

According to ZIFA, areas that require urgent attention for the stadium to meet required standards include:

Individual seats in the stadium

No fixed seats available. There should be fixed seats in all sectors in the stadium. Seats for spectators must be individual, fixed (e.g. to the floor), separated from one another, shaped, numbered, made of an unbreakable and non-flammable material, and have a backrest of a minimum height of thirty (30) cm when measured from the seat.

It should have an override capability over Public Address System in case of emergency announcements. The VOC should be staffed and serve as command centre for security and safety operations.

Renovation of B – Arena

The B Arena of the stadium should be renovated in line with CAF Training field infrastructure requirements.

The stadium needs to be fully modernized and brought up to the international standard requirements.

ZIFA have communicated CAF’s latest decision to the Sport and Recreation Commission (SRC).