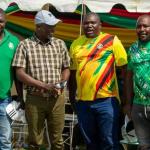 The Sports and Recreation Commission (SRC) say there haven’t been any changes to the charges the ousted ZIFA board were facing.

On Tuesday, SRC chairman Gerald Mlotshwa addressed a media conference, in the company of some of his fellow Commissioners, where he announced the dissolution of the ZIFA board.

He revealed seven allegations that the Commission had levelled against the Felton Kamambo-led ZIFA board, among them mismanagement and lack of accountability and a failure to address gender imbalances relating to the treatment of female national teams.

On Thursday, ZIFA lawyer, Chenaimoyo Gumiro, said the charges, which his clients were now facing, had been whittled down to just one.

Gumiro said the only charge, according to the latest communication they received from the SRC, was related to the trip which ZIFA financed, on a chartered flight, for their Councillors and some supporters, to watch the 2019 Nations Cup finals, in Egypt.

However, on Friday, Mlotshwa said a second letter, addressed to ZIFA on Wednesday, only dealt with the charge of the trip to Egypt and the public funds the association received related to the AFCON finals.

Mlotshwa indicated that the statement released by SRC on Tuesday was not a legal document but was meant for the press. He said:

There were no changes. There was a statement done for the press.

This is the document (the media) got on the day (of the announcement).

It’s not a legal document.

A separate letter was done to the ZIFA directors, making it clear that their suspension was based on the allegations, of the letter of 3rd July 2019.

The confusion came about because the SRC management sent a wrong draft to ZIFA.

This was recalled and the correct authorised letter sent.

Mlotshwa also provided clarity on the status of the ZIFA board members, who were ousted this week, but hold other portfolios in their constituencies.

Farai Jere, the PSL chairman, and Barbra Chikosi, the women’s football boss, sit on the ZIFA board by virtue of the positions they hold at their constituencies.

Unlike the other board members, the duo is not elected directly by the ZIFA Assembly.