ZESA Clamps Down On Electricity Thieves After Losing Billions 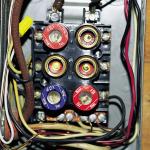 ZESA Holdings says it is losing approximately $1.4 billion annually to metre tampering and illegal connections, which is 5% of the power utility’s total revenue.

The power utility has since launched an onslaught against illegal electricity connections resulting in the arrest of 45 house owners in Harare South alone.

ZESA spokesperson George Manyaya said the blitz was not isolated to Harare but would be spread throughout the country to cut revenue losses bleeding the entity. Said Manyaya:

As testimony to our aggressive intentions, only last week our teams invaded the Ushewokunze/Chigwende area in Harare South and discovered that 45 out of the 51 households that were inspected, were irregularly connected and this is almost like a whole suburb.

Energy and Power Development acting minister Jenfan Muswere told Parliament on Wednesday that ZESA will switch off nearly 29 000 defaulting customers in the coming days in an effort to recover its money. He said:

Various credit control measures are being utilised by the utility in debt collection, which has seen collections increasing.

The defaulting clients are being submitted for blacklisting if all avenues (to recover the debts) fail.

So far 28 955 customers have been submitted for blacklisting.

The clients on post-paid and load limit are gradually being enrolled onto the pre-payment metering platform where debt is managed through a minimum deduction per month.

I think there is something wrong with ZESA. The government should look into it. Humbavha whakawandisa.