ZEC Proposes That By-Elections Be Held Next Year 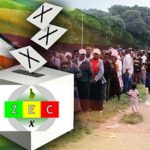 The Zimbabwe Electoral Commission (ZEC) has proposed that by-elections to fill council and Parliamentary seats left vacant following the expulsion and death of some members will be held next year.

There are 28 National Assembly and 105 local authority vacancies across the country.

The Government suspended the holding of by-elections as part of a set of measures to curb the spread of the highly contagious Covid-19 disease.

ZEC, the constitutional body mandated with running elections in the country, has come up with a roadmap towards the holding of the elections.

According to the draft electoral road map, ZEC has set April 23, 2022, as the proposed date for elections. ZEC said in a statement:

The commission works with provisional dates as the actual dates can only be proclaimed by the President.

The commission said by-elections could be proclaimed earlier or later than the set provisional dates. Added the commission:

The provisional dates are merely for planning and procurement of election material. The nation should be guided accordingly.

Most of the vacant posts were left by MDC Alliance members who were recalled by rival MDC-T following the 2019 Supreme Court ruling on MDC leadership wrangle that the latter as the official opposition that contested the 2018 elections.

Some believe the delays are meant to make sure that MDC Alliance is not represented in Parliament and local governments.

MWONZORA AND KOMICHI ARE NOW SHIVERING LIKE REEDS IN A FAST FLOWING RIVER. I BET THAT THEY WILL NOT GET A SEAT IN THE BYELECTIONS. THESE BYELECTIONS SHALL BE THEIR FIRST POLITICAL BAROMETER BEFORE WE COME TO 2023 WHERE THEY WILL BE BURIED FOR GOOD.

PRESIDENT MNANGAGWA IS CLEVERER THAN MWONZORA. HE WILL NOT DANCE TO MDC T'S FOOLISH TUNE OF SHELVING 2023 ELECTIONS FOR A UNITY GOVERNMENT. SOME QUARTERS IN THE INTERNATIONAL COMMUNITY HAVE BEEN PILING PRESSURE ON PRESIDENT MNANGAGWA TO HOLD BYELECTIONS. THEY ARE WATCHING CLOSELY.

We are waiting 4 the elections sezvo ange ave overdue