ZEC Invites Local And Foreign Observers Ahead Of March By-Elections 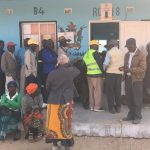 The Zimbabwe Electoral Commission (ZEC) has invited observers ahead of the March by-elections which will see 117 local authorities and 28 National Assembly seats up for grabs.

Most of the seats became vacant following recalls of MDC-Alliance members by rival MDC-T following a Supreme Court verdict that Nelson Chamisa illegally assumed the leadership of the opposition party. Polling in other areas has been necessitated by the death of MPs and councillors.

ZEC has since gazetted the election observer fees which will see local observers and local media accredited with Zimbabwe Media Commission paying US$10 or equivalent using the bank rate.

Journalists from international media houses will also pay US$50 accreditation fees while observers from outside Africa will have to part with US$100. Read the statement:

The Zec hereby invites applications from observers and media for accreditation to observe by-elections in respect of 28 National Assembly Constituencies as indicated in Proclamation No.1 of 2022 and 117 Local Authority wards to be held on 26 March 2022. All applicants must be received at ZEC Head Office no later than 22 March 2022. The accreditation of successful applicants shall be conducted between 8AM and 5PM at venues to be advised commencing 18 January 2022.

I AM HAPPY THAT GOVERNMENT HAS GIVEN PARTIES ENOUGH TIME TO HUNT FOR CANDIDATES, SELECT THEM AND ASSIST THOSE CANDIDATES IN CAMPAIGNING.

ALL POLITICAL PARTIES MUST PREPARE THOROUGHLY. THEY MUST FIND GOOD LAWYERS TO ASSIST THEIR CANDIDATES WITH NOMINATION PRINCESSES. PLEASE DO NOT ENGAGE BUSH LAWYERS. THEY WILL NOT COPY WITH THE INTRICACIES OF NOMINATION PROCESSES.

WE DO NOT EXPECT TO HEAR ANY NONSENSES ABOUT VOTE RIGGING. THOSE WHO RIG OTHERS, DO NOT RIG AND THOSE WHO USUALLY GET RIGGED DO NOT GET RIGGED.

ALL PARTIES MUST CAMPAIGN PEACEFULLY WITHOUT INTERFERING WITH ONE ANOTHER.

MEDIA, DO NOT BE STATE CAPTURED. REPORT IN GOOD FAITH.