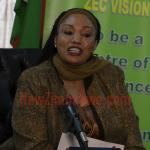 Speaking during the launch of the EkhayaVOTE2023 campaign in Bulawayo, ZEC district elections officer Sithembiso Khupe stated that the voter registration campaign is not a crime. Said Khuphe:

What people should know is that registration to vote is not politics. We are encouraging people to register to vote.

EkhayaVote2023 is a campaign by a coalition of over 25 CSOs operating from Bulawayo, Matabeleland North and Matabeleland South provinces which they launched on Friday.

However, several activists have been arrested recently while conducting peaceful voter registration campaigns in the country.