ZEC Advises On How Mwonzora Can Stop Use Of MDC, MDC Alliance 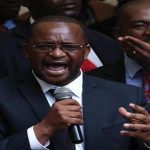 The Zimbabwe Electoral Commission (ZEC) says it does not regulate or register political parties and will accept candidate nominations for March’s by-elections on a “first come, first served” basis.

MDC-T leader Douglas Mwonzora earlier this month wrote to ZEC announcing himself as the leader of the MDC Alliance, the party led by Nelson Chamisa.

ZEC chairperson Justice Priscilla Chigumba on Monday shed light on the expected confusion when the nomination court sits on January 26. She told ZimLive:

ZEC does not adjudicate who has the right to the name of a political party because there is no legal framework that mandates the commission to regulate, deregulate and register political parties.

On January 26 the nomination court will operate on a ‘first come, first served’ basis. ZEC will not respond to letters for clout from political parties over party names.

If politicians want to stop a political party from using a party name or symbol, they must approach the electoral court which determines political parties.

MDC Alliance spokesperson Fadzayi Mahere on Monday maintained that their party would remain MDC Alliance, at least for now, as pressure mounts from supporters for Chamisa to rebrand. she told ZimLive:

We remain MDC Alliance until otherwise advised. We have safeguards in place to ensure there is no confusion come election day. The people know who their leaders are.

Chigumba said politicians were in the habit of blaming ZEC over political name disputes when the commission does not register political parties but only recognises them as prescribed by the electoral law.

Elections will take place in 28 parliamentary races and 105 municipal seats on March 26.

Most of the seats fell vacant when the MDC-T recalled elected MDC Alliance officials, armed with a March 2020 Supreme Court ruling which nullified Chamisa’s elevation to lead the MDC-T following the death of Morgan Tsvangirai a year earlier.

Mwonzora Haana part ,is a crock ,and selfish person ,he used ed to enrich himself knowingly that he will pull out when time comes

Mwonzora stop being a laughing stock. Why don't you join ZANU PF,maybe they have another job of using a mad person.

US$0 Harare
The Terraces 4 months ago

Zec has always bn clear on this one. Watch the space, Chamisa knows how to play his cards tight. He is contesting with monsters hence the need to throw caution to the wind.we shall have the loudest&longest laught after all,let's b patient

To: The Registrar General

Thanks to @ ian Douglas Smith.
You gave us a green light on Mwonzora's MISTAKES

If you are KODZONGA WA MWAMWAKO it doesn't mean that all the KODZO, KODZONGA AND KODZOLITY THAT WILL COME NEXT ARE OR HAVE STOLLEN YOUR NAME

THE RG CERTIFICATES, BIRTH CERTIFICATES AND ACADEMICAL CERTIFICATES OF KODZO, KODZONGA AND KODZOLITY ARE NOT FOR KODZO WA MWAMWAKO SO DOUGIE STOP FISHING HAVOCKS.

MDC, MDC ALLIANCE, MDC 99 AND OTHER MDCs ARE NOT YOURS DOUGIE. YOURS IS MDC T, FINISHED.

YOU HAVE NOTHING TO SAY ON THIS. SHUT UP DOUGLAS

CHAMISA IS THE PRESIDENT OF MDC ALLIANCE. FINISH
NO NONSENSE

Kkkkkk yu made my day lol

On Jan 25, Mwonzora will sleep outside zec offices...