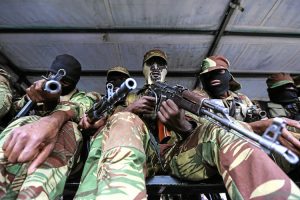 The Zimbabwean government has warned members of the Zimbabwe Defence Forces (ZDF) against engaging in criminal activities saying if caught, they shall be dealt with severely.

Information Secretary, Nick Mangwana, made the remarks while commenting on a statement by Colonel Alphios Makotore, Director of Army Public Relations that was to the effect that two soldiers had been sentenced to 40 years imprisonment each for armed robbery. Pindula News presents Makotore’s statement:

Five years each of their respective sentences were suspended on condition that they restitute the complainant, Simon Arnold of Surrey Farm near Marondera, cash amounting to US$ 16 830 and R600.

Both were reduced ranks of private and first-year trooper, respectively and discharged from the Zimbabwe Defence Forces with ignominy.

They both pleaded guilty to the charges of armed robbery which they committed on 15 November 2021 at Surrey Farm near Marondera.

The Zimbabwe National Army does not condone cases of indiscipline and misconduct and will continue to pass deterrent sentences on any would-be offenders.

In response, Mangwana said the sentence was a warning to other members of the ZDF. He said this Friday:

This is a clear message to members of the ZDF who are tempted to engage in criminal activity. You will be dealt with severely.

This comes amid a surge in reported armed robbery cases involving members of the uniformed forces in the country.

Even with those silly threats as long as people are hungry they will always engage in nefarious activities. Look at what happens in Somalia. People at the top need to stop looting and destroying our economy and focus on making Zimbabwe great again. Thats the only way the govt can be able to take adequate care of all uniformed forces otherwise another coup de tat is on its way as more and more citizens are growing tired of this incompetent regime