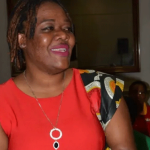 The ZANU PF government has been accused of using its alleged surrogates to capture the Zimbabwe Congress of Trade Unions (ZCTU) through the election of new leadership sympathetic to the ruling party.

Taruvinga, who becomes the first woman to become ZCTU president, garnered 73 votes against Mutasa’s 59 in elections held under controversial circumstances.

ZANU PF and MDC-T led by Douglas Mwonzora were quick to celebrate her victory.

Mwonzora is widely viewed in opposition and civil society circles as a ZANU PF “stooge”.

The Amalgamated Rural Teachers Union of Zimbabwe (ARTUZ) and the Footwear Tanners and Allied Workers’ Union delegates were stripped of their voting rights ahead of the congress under unclear circumstances.

ZCTU wrote to the two unions on 8 October advising them that their voting rights had been stripped based on a legal opinion from the labour body’s lawyers Muchadehama and Makono (MMM).

The two unions on 20 October represented by their lawyers Mtetwa and Nyambirai filed an urgent chamber application seeking the postponement of the elective conference until the issue of their voting rights was addressed.

Justice Fatima Maxwell ruled in favour of ZCTU, resulting in the holding of the elective congress.

Meanwhile, Doug Coltart, who followed the ZCTU election process closely as a lawyer for ARTUZ, said the elections were manipulated in favour of a pro-ZANU PF faction within ZCTU. Said Coltart:

The story needs to be told. Essentially, it relates to the co-option of the ZCTU by the regime at the just-ended elective congress; some of the shenanigans that have gone on in the lead up to that congress in order to facilitate that co-option.

It’s quite concerning, it has implications for society as a whole.

The labour movement is being co-opted and I think it’s part of a broader strategy of co-option that the regime appears to be rolling out.

I have been involved in the legal side of things trying to defend the rights of certain unions who were stripped of their voting rights in the lead up to the congress as part of this strategy of co-option.

As long as you dnt become pro gvt and work to alleviate struggles of the workers in this inflationary environment where workers are getting slave wages then we can safely say congrats...