ZBC TV And Radio Licence Fees Set To Be Hiked 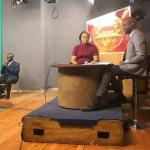 Television and radio licence fees are set to go up after Cabinet approved a proposal by the Cabinet Committee on National Development Planning to effect the fees adjustment.

Mutsvangwa said ZBC will soon be launching two more channels and listeners’ licence fees should cover 80% of the broadcaster’s operating costs. She said:

Cabinet received and approved a report of the Cabinet Committee on National Development Planning on the proposed Review of Zimbabwe Broadcasting Corporation Listeners’ Licence Fees as presented by the Minister of Information, Publicity and Broadcasting Services.

Cabinet noted that the Zimbabwe Broadcasting Corporation’s equipment for both radio and television studios is obsolete and has outlived its lifespan, and therefore requires urgent replacement to enable the broadcaster to improve service delivery.

Zimbabwe Broadcasting Corporation will soon be launching two more channels towards the fulfilment of its mandate, and for these channels to be effectively rolled out, in addition to the ongoing digitalization of its transmitters, the organisation has to be capacitated.

Listeners’ licence fees should cover 80% of the Corporation’s operational costs.

Kkkk my phone my tv

One television station in 40 years be serious Zimbabwe

Who watches your shit outdated programmes?A failed station in a failed state with an incompetent government.You don't make money from listeners licence but from adverts.Check out open view

ZBC is a failed project as a channel on its own, how can one introduce another project to fail just like the first project and when it comes to paying for it it's like expecting sunlight at 3am kana muchida kubhadharisa introduce a decoder hameno anotenga though ds is enough

I don't even know any of the programs on ztv, my family don't care much about ztv so don't expect us to pay for a channel we don't watch we don't even have an aerial saka kwidzirai vanoiona