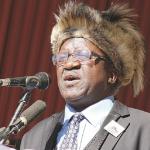 ZAPU’s elective congress commences this Thursday in Bulawayo, with the main events of the congress running from 28 to 30 October.

The opposition party’s congress was postponed several times last year and this year due to the COVID-19 lockdown regulations.

ZAPU is set to elect its new president to replace the late former intelligence supremo and party president, Dumiso Dabengwa, who died in May 2019.

Party acting president Isaac Mabuka yesterday told Southern Eye that they were finalising the accreditation of members, with 2 000 delegates expected at the congress. Said Mabuka:

All is in order, and we will start with the accreditation of our members tomorrow (today), then on the second day, we will hold a closed-door meeting.

We expect about 2 000 delegates at the Bulawayo Amphitheatre for the congress.

Sibangilizwe Nkomo, the son of the late nationalist and Vice-President Joshua Nkomo, is leading in the nominations for the party presidency after bagging nine out of 10 provinces.

In a Democratic country,there is no fear of opposition parties,they are welcome and people are to choose leaders of their choice,Welcome ZAPU as a people's party not a forerunner of former colonizers.