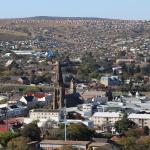 He was referring to South Africa’s Home Affairs Minister Aaron Motsoaledi whose ministry is responsible for immigration in that country.

In November last year, South Africa announced that it was discontinuing special permits for Zimbabweans, called the Zimbabwe Exemption Permits (ZEP) that benefited about 200 000 Zimbabwean nationals.

In a statement, Chitando accused Motsoaledi of promoting xenophobia, remarks that may end his stay in South Africa. Part of the statement read:

Dr Motsoledi emboldens xenophobic violence, through his support for xenophobic organisations, like “Put South Africa First”, which incite violence targeting Zimbabweans, which has led to the loss of life, severe injury, and destruction of property.

South Africa’s Head of Public Diplomacy in the Ministry of International Relations and Cooperation, Clayson Monyela, confirmed that Chitando has been reported to authorities.

He was responding to a Twitter user, African Renaissance who had demanded that Chitando be reported to “Monyela’s bosses” to act. The tweet read:

You guys are playing. Deport the boy with immediate effect. This back and forth won’t work. He insulted our Minister & inevitably our cabinet, and in any sane sovereign state, he should be sending such foolish letters outside the country. @ClaysonMonyela report to bosses to act.

The same people who accuse Zimbabwe of violating human rights. Chitando wasn't telling South Africa what to do in fact he was sending a message to his party. Are these south Africans saying no one must talk what they dislike of he /she is in their land.
#whatsthedifferencewithbrits

In as much as I dislike #ZanuPf officials, I believe they should be allowed to speak out their mind.

It began with Maponga and now Chitando. One by one you're going to be deported because of bigmouths in foreign territories-Blabbermouths.

He is abusing the Zanu Pf name by not following protocol ,he shoud come back home and be enrolled at The Chitepo School of Idealogy before he is allowed to set foot in any foreign land ,he needs severe political orientation,kwete kuhukura kwaari kuita ,zvine vazvo zvaava kuda kutaura ,aita mutoto

SIMBA CHITANDO INVITED PROBLEMS FOR HIMSELF. WHATEVER HAPPENS TO THIS YOUNG MAN I WILL NOT SHED EVEN CROCODILE TEARS FOR HIM.

THE ZIMBABWE AMBASSADOR TO THE REPUBLIC OF SOUTH AFRICA HAS RESPONDED WELL BY DISTANCING HIMSELF FROM SIMBA'S UTTERANCES.

SIMBA CHITANDO SHOULD ASK FOR FORGIVENESS ON BENDED KNEES AND ON ELBOWS FROM THE PEOPLE OF SOUTH AFRICA, PARTICULARLY FROM THE SOUTH AFRICAN GOVERNMENT.

ZANU PF GOVERNMENT SHOULD FEEL ASHAMED OF THEIR OFFICIAL'S CONDUCT. THEY SHOULD DEMOTE HIM IMMEDIATELY AND RECALL HIM.