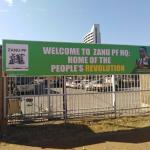 The ruling ZANU PF party has commenced discussions around extending the presidential term for President Emmerson Mnangagwa beyond 2023.

The constitution allows for two terms in office (10 years) per President and if Mnangagwa is re-elected in the upcoming 2023 polls, he will not be eligible to contest in the 2028 elections.

Mnangagwa came to power in November 2017 on the back of a military coup that ended the late former president, Robert Mugabe’s 37-year reign. He was elected for his first 5-year term in 2018.

We agreed that it is important that if the constitution of the country can be amended so that he (Mnangagwa) can have more than two terms.

Chirau also said that the ZANU PF youth league is endorsing President Mnangagwa as their 2023 presidential candidate. He said:

The first thing we discussed and agreed on as the executive national youth league is that His Excellency President Emerson Dambudzo Mnangagwa is our sole candidate for the party in the 2023 elections because in less than three years he has shown good leadership so we do believe that he should continue.

Yes yes my President,we will also spread the word to the youths.Go register to vote.

So Zanu youth have admitted that they dont have the intelligence and academic capacity to lead.They're not ambitious and visionary such that they rest all thier hopes on someone who should've been on pension by now resting navazukuru.Its a shame.

Lets not amend the constitution. If i was in power i would like to resign after 2023 and show a different perspective of democracy

They water their green gradens with the peoples tears..but is faithful..

Disappointed to learn than there are still bootlickers like chipanga.I hope Ed doesn't take this seriously.If the people are going to choose him in the forthcoming term,I welcome it but going beyond 2028 will not be good at all especially for our juvenile democrary

It shall come to pass

Heartless people ..they are being paid this is what should be called stage-managed

It took a lot to get to 2 by 5yr terms for the president...and you youngsters are "bootlicking" and suggest constitutional amendment as easy as that????... we stick by the constitution...

Impossible especially with indiscipline displayed by card carrying members,the infighting and power grabbing thugs.You will be shocked by the winds of change.