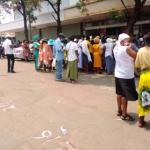 The ZANU PF youths clashed with illegal foreign currency dealers who operate in the area, claiming the space belonged to them.

They are reportedly charging US$2 for each vending space and also issuing ZANU PF membership to the vendors.

When CITE visited the area on Thursday, part of 5th Avenue between Herbert Chitepo and Fort Street had been barricaded with vendors seen selling various wares.

In a statement on Thursday, Mayor Solomon Mguni said the ongoing allocation of vending bays is unlawful. Said Mguni:

The City of Bulawayo is aware of illegal occupation by unauthorized personnel on the area along the 5th Avenue between Herbert Chitepo and Fort Street.

The ongoing allocation of vending bays by unsanctioned personnel is not recognized or supported by the City of Bulawayo and is therefore unlawful.

He said the area is not a designated vending site and warned the public that those occupying the space will be evicted and risk losing their hard-earned money.

I haven’t received a detailed report but I think they are vendors in town doing their business.

As ZANU PF we are doing our politics we are not aware of what is happening you can contact the Town Clerk or the Mayor because they are the ones responsible for the area.

The area used to be a flea market before the Bulawayo City Council (BCC) shut down the market as part of measures to decongest the CBD in light of lockdown restrictions to contain the spread of the coronavirus.

Easy money is in the blood of Zany party