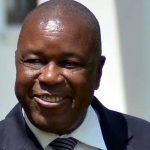 Zimbabwe’s Government will continue leaning on China for support to prop up the country’s ailing health sector as thousands of local health professionals migrate to Western countries seeking greener pastures.

Mutsvangwa said, unlike the Americans who preach democracy that cannot be eaten, China has been providing COVID-19 vaccines for Zimbabwe’s vaccination programme. Said Mutsvangwa:

We value this relationship and it has always been beneficial to us. China has been handy in that regard (health sector) and in investment.

What we have been trying to highlight to you is that China is an all-weather friend. We were not invited to the democratic sort of fiesta of the Americans in Washington, somehow because we created democracy which they denied.

We cannot eat the democracy of the Americans, but we definitely can benefit from the medical vaccines of the Chinese and save lives.

One relationship is very material, the other one is abstract and we would rather concentrate on the material one.

Mutsvangwa also accused Western countries of causing brain in the medical sector by luring the health professionals with salaries that Zimbabwe cannot match. He said:

When a crisis comes, they also have an ageing population, they come to recruit from Zimbabwe and because we are relatively poorer than them — because we were colonised and enslaved, we are not as rich as they are.

We train the best people, they come and snatch them and never want to compensate us for those people who we invest in so much through training, but they are now lured by better salaries because they have been neglectful to train their own personnel.

So, we are always at the receiving end of these people who want to lecture us about democracy and human rights, and all this.

There are no special salary scales for professional Zimbabweans out there, and the money those professionals send to family and friends here is what is keeping the economy going. As for vaccines, China should thank Zimbabweans for trusting in their vaccine even before WHO had approved it.

Herd immunity you question is spot on,🚳 Mr Vostro in his previous Budget Statement he alluded that the State had put aside $100million USD to procure vaccines.Th ZANY Guyz always preache that the Chinese have donated 10million doses,so chokwadi ndechipi.

I WOULD LIKE TO THANK CHINA FOR STANDING BY ZIMBABWE SINCE THE COMING ON BOARD OF COVID 19 PANDEMIC. CHINA IS OUR ALL WEATHER FRIEND, COME RAIN OR THUNDER.

THE CHINESE ARE MINING BLACK STONES IN MUTOKO AND TAKING THEM TO CHINA. THIS BRINGS IN FOREIGN CURRENCY IN OUR ZIMBABWE.

BUT I FAIL TO UNDERSTAND WHERE VACCINES AND DEMOCRACY CONNECT. I MUST HONOR UP THAT I HAVE LIMITED EDUCATION WHICH I ACQUIRED IN EARLY 1970s AND TRIED TO POLISH IT UP IN THE 1980s AND 1990s. MY UNDERSTANDING IS THAT DEMOCRACY AND VACCINES DO NOT MIX. THEY ARE LIKE WATER AND PAINT.

THEN COMES THE ISSUE OF BRAIN DRAIN. THIS ISSUE IS REALLY HOT AT THE MOMENT IN ZIMBABWE. NO FOREIGN EMBASSY IN THIS COUNTRY IS RECRUITING EMPLOYEES FROM ZIMBABWE. OUT OF FRUSTRATION ZIMBABWEANS ARE GOING ABROAD SEEKING GREENER PASTURES.

THESE FOREIGN COUNTRIES ARE NOT LURING OUR PEOPLE. THEY ACTUALLY FEEL SORRY FOR OUR PEOPLE AND END UP GIVING THEM JOBS.

OUR SOLUTION LIES IN US PAYING OUR LABOUR FORCE ADEQUATELY SO THAT THEY PUT FOOD ON THE TABLE FOR THEIR CHILDREN.

THIS BLAME GAME MUST STOP. LET US FIRST LOOK INTO OUR EYES AND FIND OUT IF WE DO NOT HAVE A BIGGER SPECK IN OUR EYES BEFORE WE CONDEMN OTHERS WHO HAVE SMALLER SPECK IN THEIR EYES.

WE SHALL ONE DAY WAKE UP TO FIND ALL THE PEOPLE GONE ABROAD.

Well done bush lawyer I wish your message reach the ears of talkative Mutsvangwa trully he is busy blaming other huma beings being accommodated in foreign lands for the betterment of there lives and for there extended families.The health workers he is saying we are training are not trained for free they use resources from there coffers until they are dry.So if anyone choose to work abroad to boost pockets that's not a problem at all.These people send there children to learn to the same weastern countries he is blaming did anybody complained about that Mutsvangwa should just shut up I think that is why ED removed him from being one of his advisors bcz he doesn't have anything to offfer

If they are for free, thank you Mr Zing pin muchaina

How come the grass is not greener in China. Blah blah blah free donations zvipi muchitengesa nyika kuma China, get away mhani.