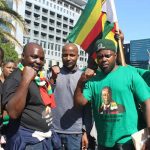 Tsenengamu was speaking during a press conference in Harare Friday, where he launched the party’s manifesto which focuses more on youth empowerment. Tsenengamu said:

Some of us did not get this full opportunity to lead without interference. We were used and abused by our elders in our political parties to further and protect their interests and agendas and we were promised that we will lead tomorrow, so I want to tell you that your time as young people is now.

We were given promises which were never fulfilled, all we got were t-shirts, bandanas, caps, and a promise to a future that never came, so I am challenging you today that you must be firm.

You are going to see ZANU PF cars flooding your ghettos and your rural areas when they could not even afford to give you a single mask but they will make sure that they bring 5 million t-shirts, caps, zambias, scarves and bandanas so that each and everyone of you gets a t-shirts and so you can go and vote for them, this is how sad our situation is.

The guy calling himself Sir must learn to put across his political issues on these platforms in a civilised manner, some statements will not only land you in trouble but may not help in building our country.

US$8.00 Chitungwiza
Tang ku 6 months ago

GODFREY Mupfana Vami....ok Sorry Mr President ndont say much of them just Recruit all younger Once Unyerere handiti all the best Mr Future President my Blessings 💘

Politicians: so evil and heartless that when it comes to political violence,they organize other people's Children. But when to business opportunities and other big benefits,they organize their children and relatives.