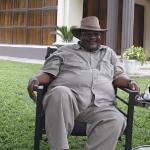 Mpofu, who reportedly owns two farms, was allocated 145 hectares of Kerlshmar Farm which measures 553 hectares and is co-owned by Siphosami Malunga, the son of former ZAPU stalwart Sydney Malunga.

As ZANU PF secretary for administration, Mpofu is the fifth most senior figure in the party. According to ZimLive, Mpofu exerts a lot of influence in Matabeleland North, where he owns a sprawling farm with over 1 000 cattle and another farm close to his homestead in Nyamadlovu where he previously grew tobacco.

However, in a state gazette, Lands minister Anxious Masuka said the farm was compulsory acquired under section 72(2) of the country’s constitution.

According to an offer letter dated 30 June 2021 seen by CITE, Masuka parcelled out 145 hectares of the farm to Mpofu’s company Mswelangubo Farm. Wrote Masuka:

I am pleased to offer to Mswelangubo Farm the following farm, which was compulsorily acquired in Umguza district Matabeleland North province for use by the Mswelangubo Farm.

Please note that the land in question is for institutional use by Mswelangubo Farm and shall remain state land on which terms and conditions for state land apply.

Contacted for comment by CITE, Mpofu said he was not at liberty to comment as the matter is sub judice. He said:

Do you want me to talk about something that is in court? This is the same case that is in the court so I cannot do that, as the matter is being handled in the courts.

Let’s wait until the case is solved at the court then we can talk about what is happening.

Part of the land was also parcelled out to Dumisani Madzivanyati a Bulawayo businessman and NUST lecturer.

This week Madzivanyati was ordered by the High Court to stop interfering with the farm operations at Esidakeni.

Central Intelligence Organisation (CIO) co-deputy director-general Gatsha Mzithulela and CIO operative Reason Mpofu have been identified as the other people behind the farm seizure.

Was Mugabe Wrong On Firing Mnangagwa?

By A Correspondent -President Emmerson Mnangagwa was on this day in 2017 fired from both Zanu P.F. and the government by the late former President Robert Mugabe.

Below is Mugabe’s statement issued when he fired Mnangagwa.

In accordance with the Constitution of Zimbabwe Amendment Number 20 Act of 2013, Section 329, 61k Schedule. Paragraph 14, Sub-paragraph (2), His Excellency the President, Comrade R.G. Mugabe, has exercised his Powers to relieve Honourable Vice President E.D. Mnangagwa, of his position as Vice President of the Republic of Zimbabwe with immediate effect. It had become evident that his conduct in the discharge of his duties had become inconsistent with his official responsibilities. The Vice President has consistently and persistently exhibited traits of disloyalty, disrespect, deceitfulness and unreliability. He has also demonstrated little probity in the execution of his duties.