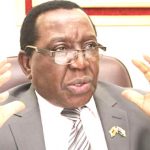 Zanu-PF Secretary for Administration Dr. Obert Mpofu confirmed the death. He said Cde Khaya Moyo died this afternoon at Mater Dei Hospital in Bulawayo where he was admitted.

"Yes, I can confirm that he has passed on. I have just received the information. He died about 30 minutes ago. Get in touch with Dr (David) Parirenyatwa he also got that message while I was talking to him. He is in Bulawayo, he could be the appropriate person to talk to"

Khaya Moyo, according to a close family member, succumbed to an undisclosed long-term illness.

He was born on the 1st of October 1945. He was enrolled at Fletcher Secondary School up to 1965. Moyo was married to Sibonokhuhle and the couple divorced in 2013 with Moyo accusing his wife of infidelity. They have two sons Khanyisa and Mandlenkosi. He then married a Bulawayo businesswoman Margaret Mhambi in 2013.

He received military training in Russia and Cuba and he attended the Malt, Geneva and Lancaster Conference which resulted in the Lancaster House Agreement together with Joshua Nkomo.

In 2007 he was appointed Zimbabwe's ambassador to South Africa, a post he held until 2011.

He was in 2013 tipped to assume the role of the second Vice-President after the death of John Nkomo in that year. Phelekezela Mphoko however was later appointed Vice President in December 2014.

On 6 November 2017, Khaya Moyo announced the dismissal of then Vice President, Emmerson Mnangagwa from his post as well as from Zanu-PF. Moyo famously said that Mnangagwa had displayed "traits of disloyalty".

2 weeks later, on 21 November, immediately after Mugabe's forced resignation in a coup led by then military General Chiwenga, Khaya Moyo announced Mnangagwa's return saying "Mnangagwa... will come back in the next 24 hours or so and he will be the one who will be sworn in to be (interim) president for 90 days,"

In September 2021, Obert Mpofu announced that Dr Mike Bimha had been appointed acting Secretary for Information and Publicity with immediate effect in Moyo's absence.

Rest in peace cde Khaya.The only person to be aligned with RG n Mnangagwa when the 2 were at each other's throat.Hahaha still searching kuti makazvigona sei

Taura hako, we need to have humanity in us.

Politicians are hypocrites..
Ladies and Gees lets give this comrade a moment of laughter..
Its pay back time nigga.

You are an idiot. There is no such thing as a good politician. He was a bad guy. He participated im murder. Killed many people. Hell yeah. He died. What goes arpund comes around. Bitch ass nigga

Rest in power khaya moyo.god is for us all

True. He sabotaged the economy by backing the likes of ED into power and that's the legacy he has left, we'll forget about him as soon as possible

It's really hard to believe that he's no more, may his soul rest in peace!

So sad rest in peace