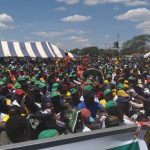 A ZANU PF Mashonaland West provincial coordinating committee (PCC) meeting scheduled for Saturday was cancelled at the eleventh hour after 50 members sent apologies they could not attend owing to illness.

The meeting was postponed indefinitely after about a third of the PCC members said they were exhibiting flu-like symptoms, which are suspected COVID-19 positive cases.

The ZANU PF provincial structure has over 180 members.

NewZimbabwe.com could not get a comment from the acting provincial chairperson, Abia Mujeri but a ZANU PF insider confirmed the development. The official said:

The PCC meeting has been cancelled after 50 or more members of the organ advised they could not attend owing to illness.

The meeting was set to give the green light to members to start canvassing for support ahead of elections this December to choose a new substantive provincial chairperson and other committee members.

The province had been without a substantive chairperson since June following the promotion of Justice Minister Ziyambi Ziyambi to the party’s Politburo.

Covid will teach you how to observe, social distancing