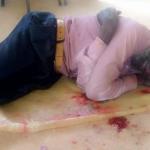 Chamisa was in Zvimba West winding up his three-day “Meet The People Tour” of the province.

He has been to Manicaland and Masvingo provinces where bloody clashes between Zanu PF and MDC Alliance supporters have also been recorded.

In Zvimba West Friday, several MDC Alliance supporters were reportedly injured after they were attacked by known Zanu PF functionaries.

Among the injured was 75-year-old Morgan Machingura, who was seriously injured on the face.

ZANU PF has proved once again that it is a cult of blood-thirsty vampires who always seek to spill blood at every whim and turn.

In a bid to shut out MDC Alliance president Chamisa from accessing former Zanu PF strongholds, they hired and bused militia to Zvimba West where our president was set to commiserate with the family of one of our staunch members who is unwell after losing his daughter, mother, and brother within a space of three weeks.

He added that the assailants were bused in by one Leeroy Nyamukanga while Lovemore Gumbochuma, a 2008 independent parliamentary candidate who is also a retired British Army soldier, allegedly sponsored the attackers.

Mandava added that the assailants who were visibly intoxicated threw stones and fired catapults without any provocation whatsoever.

She was reportedly rushed to hospital by some Good Samaritans.

MDC Alliance posted on Twitter claiming tsaying the perpetrators of these horrific crimes who must be brought to justice are: Leoroy Chagwedera/Chamukanga, Premore Karinga, Benbotta Run’anga, Tineyi Sengere among others.” The party tagged the Zimbabwe Republic Police (ZRP).

However, Zanu PF provincial secretary for security, Tommy Mwanza dismissed claims that the governing party had deployed its members to commit acts of violence.

In an interview with NewZimbabwe.com, Mwanza said “Zanu PF is a peaceful and experienced political party which cannot be naive to that extent.”

He reiterated the party’s claims that “MDC Alliance was seeking sympathy from the United Nations special rapporteur (Alena Douhan) and was stage-managing violence against its leader.”