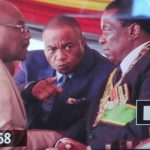 A ZANU PF faction reportedly led by Vice-President Constantino Chiwenga is alleged to be behind several plots targeted at unseating President Emmerson Mnangagwa.

Reports of intra-party fighting have intensified ahead of the ruling party’s national conference that begins in Bindura this week.

War veterans’ protests scheduled for next week coincide with major ZANU PF activities that include the conference and campaigns for the removal of sanctions against the country.

Amos Sigauke, one of the leaders of the war veterans group, said they will hold their protests in Harare. Sigauke said:

We are marching from Africa Unity Square, Munhumutapa, Parliament, Ministry of Defence and Judiciary. We are getting $16 000 and are dying poor yet they lie to us that we will have mines and land. Only a few are benefitting and those national heroes they declare die poor. They glorify us when we are dead. There is massive looting and corruption going on and all that must end. Belarus and Chinese nationals are taking over and it is like we are reversing the land reform programme and compensating white farmers when others are getting reparations.

In August, nine war veterans were arrested outside the offices of Finance minister Mthuli Ncube while protesting against low pensions.

Mnangagwa allegedly ordered the release of the war veterans, who were accused of doing Chiwenga’s bidding.

Zanu PF spokesperson Mike Bimha downplayed the clashes between Mnangagwa’s government and war veterans, saying the former fighters were happy with the performance of the new administration.

Zanu PF youths on Friday demanded the amendment of the constitution to allow Mnangagwa to rule for more than two terms in another move seen as targeted at Chiwenga, who is said to harbour presidential ambitions.

Everything shall come to pass. Thula ZNLWVA

Most of ma war veterians ndevanamahobo,they are suffering these guys and one gets to ask themselves kuti what was the reason of the war when these soilders are not enjoying any freedom.Is there any freedom in Zimbabwe?