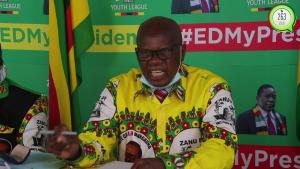 Legal experts Monday said it would be unconstitutional for the ruling ZANU PF party to bar the newly-formed Citizens Coalition for Change (CCC) led by Nelson Chamisa from using the yellow colour on its regalia and symbols.

Addressing a political rally in Chitungwiza at the weekend, ruling ZANU PF officials threatened to bar Chamisa from using the colour yellow as its party symbol, saying it was their colour that signified mineral wealth.

Zimbabwe Human Rights NGO Forum director Musa Kika yesterday told NewsDay that it was silly for ZANU PF to claim ownership of any colour. He said:

No one has a patent, trademark, copyright or any form of intellectual property right over a colour. No one can bar a competitor from using a particular colour.

Trademark infringement is looked at holistically — name, symbol, design and colour. Under our laws, and under the laws of common sense, the alleged expression of interest to bar the use of a colour has no basis.

It will be an unfruitful challenge, trust me. Other than it being political bantering, I would not think that ZANU PF itself would sink low to that extent… ZANU PF cannot claim ownership of any colour

He said ZANU PF was in panic mode, hence such pronouncements and the matter is not even for the courts to determine as colours are generic.

His remarks were echoed by CCC vice-president Tendai Biti who said “it would be irrational for anyone to claim ownership of any colour, the same as suggesting that bananas abandon the colour yellow for red.”

ONE OF THEM WILL END UP SAYING HE IS CHAMISA WACHO

THIS SUBJECT OF DEMANDING THAT CITIZENS COALITION FOR CHANGE ,CCC, BE BARRED FROM USING YELLOW COLOUR BECAUSE IT BELONGS TO ZANU PF ALSO APPEARED IN PINDULA YESTERDAY.

IN MY COMMENT I ALSO SAID IT WAS NAIVE FOR ANYBODY, PARTICULARLY ADVOCATE GODWILLS MASIMIREMBWA, A LAWYER, TO CLAIM THAT ANY COLOUR BELONGS TO ANYONE.

I ALSO POINTED OUT THAT THEY WERE NOT SPEAKING FROM ZANU PF POINT OF THE VIEW.