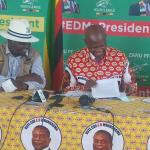 On Tuesday, UK MPs in the House of Lords criticised the Government of Zimbabwe’s brutal clampdown on critics and protestors in the first half of 2021.

Lord St. John Blesto said the British government will only support Zimbabwe’s bid to rejoin the Commonwealth when Harare restores the rule of law. He said:

Our UK Government will only support Zimbabwe’s bid to rejoin the Commonwealth when the rule of law is restored, and the freedom of speech and political freedoms are protected.

In response, Mugwadi called UK MPs “Lilliputians”, that is, a trivial or very small person or thing. Said Mugwadi:

We defeated regime change long ago during war-monger Tony Blair’s time. It is scandalous for these Lilliputians to make noise about a nation whose name they can hardly pronounce.

The UK Embassy and UK Ambassador to Zimbabwe Melanie Robinson must be the most embarrassed by such classical stupidity. Sit down pink pigs!

Tony Blair was British Prime Minister when relations between the UK and Zimbabwe deteriorated at the turn of the Millenium.

This comes as Mnangagwa has been trying to re-establish cordial relations between Zimbabwe and western powers.

Why are you having sleepless nights trying to re-engage with those 'pinky pigs', nonsense!

Yeah we shld be protect by our police even army but now they fought us for wat. Can we slaves in our own motherland. Plz god shld help us on this seriously event caz we need help.

Too much whisk in your mouth Mgwadi.

ZANU PF DIRECTOR OF INFORMATION, TAFADZWA MUGWADI, MAY CALL THE BRITISH BY WHATEVER NAMES. IT WILL NOT CHANGE THINGS ON THE GROUND. ZANU PF MUST STOP HARASSING OPPOSITION POLITICAL PARTIES, CIVIL SOCIETY AND JOURNALISTS.

WE HAVE READ IN SOCIAL MEDIA AND WATCHED POLICE ON TELEVISION ESCORTING SUSPECTED ZANU PF HOOLIGANS BARIKADING ROADS TO PREVENT THE LEADER OF A CERTAIN POLITICAL PARTY FROM ENTERING CERTAIN AREAS. WE HAVE WATCHED ON TELEVISION SOLDIERS KNEELING AND TAKING AIM IN THE STREETS SHOOTING PROTESTERS.

PRESIDENT ED MNANGAGWA IS WORKING HARD TO ENGAGE AND REENGAGE, BUT HIS EFFORT WILL BE DISENGAGED BY FAILURE TO FOLLOW THE RULE OF LAW AND THE CONSTITUTION.

ALL EFFORTS TO PERSUADE GREAT BRITIAN, EUROPEAN UNION AND UNITED STATES OF AMERICA TO UNSHACKLE SANCTIONS WILL COME TO NAUGHT.

US$4.00 Harare
Touchscreen 5 months ago

Vision 2030 is about engagement and reengagement. So plz watch wat you say. We no longer want to be isolated. There are better ways of expressing zvakurwadza.

Ecc 10:11 KJV Surely the serpent will bite without enchantment; and a babbler is no better.

Yes they are pink 🐖 pigs with blue balls like 🐒 monkeys