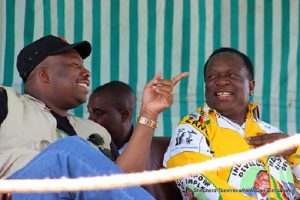 Exiled former cabinet minister Saviour Kasukuwere last week said ZANU PF bigwigs were scared of his imminent return to the party and would not dare touch him.

When Kasukuwere announced that he was preparing a comeback to ZANU PF to “save ZANU PF” and to stop all injustices against his colleagues in exile, the party spokesperson Christopher Mutsvangwa released an angry statement.

In an interview with The Standard on Friday, Kasukuwere said Mutsvangwa’s angry statement exposed the panic among party leaders. He said:

Mutsvangwa’s response shows that the Politburo and those who claim to be leaders of the party are already engaged and feeling the heat.

Arrest is not a thing to be feared of if you are a revolutionary who is standing for what you believe in and if you have the mandate from the people. Mnangagwa was arrested, Mugabe, Joshua Nkomo and the late Nelson Mandela and others…

He said if he were to be arrested, it will be confirmation that Mnangagwa is afraid of losing power to him.

Kasukuwere has been linked to a plot to challenge Mnangagwa in the 2023 general elections and has also accused Kasukuwere of being the brains behind the High Court application by party activist Sybeth Musengezi challenging Mnangagwa’s 2017 ascendancy to power.

Chokwadi chaiko is if he decides to come back vamwe vamunoti varume vachazviwetera. He ran away paya because vairondwa in darkness and almost everyone didn't know what was happening around the days of that other operation. So waingofa mudima wotsakatika. But now fair come back haaa this guy is a real threat.

To come or not to come, it's up to him. He should remember that all is fair in love and war.

Tyson must come back and form his own breakaway party named Zanu PF-K.