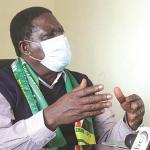 Kalimbwe made fun of Mnangagwa’s COP26 trip last week where he said the Zimbabwean leader came back empty-handed.

He also ridiculed Mnangagwa for gathering hundreds of ZANU PF supporters at the Robert Gabriel Mugabe International Airport on his return from Glasgow as if he had won a trophy. Tweeted Kalimbwe:

Our leader will return to Lusaka and go home peacefully — to continue serving. There will not be airport victory celebrations, we didn’t win any trophy. The country needs fixing — that is what matters most.

Addressing the media in Harare on Thursday, Bimha said both ZANU PF and UPND should use proper channels to communicate rather than using individuals. He said:

Even if I have issues or concerns with the ruling party in Zambia, there are proper channels that should be followed by both parties to communicate, not through individuals.

I cannot just come out and make public comments about the ruling party in Zambia or vice-versa, there are channels that should be followed.

The UPND is seen as close to Zimbabwe’s opposition, MDC Alliance, after inviting its leaders, Chamisa and Tendai Biti and other opposition figures in the region to Zambia President Hakainde Hichilema’s inauguration.

Whatever he is saying about ZANU PF is not a lie. If they think Kalimbwe is not telling the truth, ZANU PF should just share the evidence in public.

Who doesn’t know about Mnangagwa’s regime and its ills? Kalimbwe is not just a Zambian citizen, but an African who advocates for democracy and freedom of speech.

It is a wake-up call to ZANU PF because the world is changing. What I can say is that it’s a continental revolution, and things are changing. It’s a wave of democracy.

ED and cronies are running our country into the ground. He barely passes a week without embarrassing himself and bringing shame to ZANU Pf. The very same behavior that caused us to support the removal of Mugabe

Bimha uri mbiti you betrayed ur sister and ur brother inlaw Bob, UPDM and MDC Allice for Africa

The truth hurts.Kalimbwe is actually expressing his views as our neighbour.ZANU pf remember during the liberation struggle,Zambia played a very crucial role for us to attain independence.But now every SADC neighbour is sick and tired of ZANU pf.
Zimbabweans are insulted ,questioned and abused because of ZANU pf regionally,Botswana we are called makwerekwere,South Africans say we don't bathe ,"stinking makwerekwere",Zambia we are called Kawalala meaning thieves and in Mocambique guys if you not able to understand Sena you can be killed.I speak this through experience.Zimbabweans are hated and the most abused people in Southern Africa.You find someone chanting viva ZANU,if only you knew kuti vana ve Zimbabwe are running away from that day and night.Musina or Messina just after Beitbridge wapinda South Africa vana zvibhonda ,destitutes or kuti street kids and most of them are from Masvingo .Masvingo ndiyo ine Zimba re mabwe ,The Great Zimbabwe, that is where vanaMbuya nehanda hails from ,so my point is are you honouring Nehanda 100% with those statues when in fact her seeds are running away from their inheritance.
Come on ZANU pf admit it you have failed!

Its only in Zimbabwe where new wine is pit in old wineskin.ppl are tired of the same lies 40 years after.

UNITED PARTY FOR NATIONAL DEVELOPMENT OF ZAMBIA IS CLEARLY SHOWING ZANU PF THAT THEY DO NOT WANT TO BE FRIENDS OF UNDEMOCRATIC PARTIES IN THE REGION AND ABROAD.

TRUTHFULNESS SOMETIMES IS VERY PAINFUL. KALIMBWE IS NOT LYING. FOR EXAMPLE, SOUTH AFRICA SECURED CLIMATE CHANGE DEALS WORTH 8.5 US BILLION. ZIMBABWE IS SAID TO HAVE SECURED HANDSHAKE PICTURES AND PERHAPS A FEW BOTTLES OF JONNY WALKER [JOHN WOFAMBA] WHISKY KKKK.

THIS PRACTICE OF BUSING PEOPLE TO RG MUGABE INTERNATIONAL AIRPORT MUST BE SCRAPED BECAUSE IT SERVICES NO PURPOSE. THESE ARE SOME OF THE COSTS WE SAY MUST BE SAVED AND DIRECTED TOWARDS HOLDING OF BY-ELECTIONS.

Atadzei Kalimbwe? was there anything to celebrate if you think about it