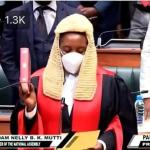 The opposition Patriotic Front has instructed members of parliament to commence the process of impeaching the speaker of the National Assembly, Nelly Mutti.

This follows the speaker’s ruling that seats that were nullified are vacant, despite affected parties appealing in the Constitutional Court.

Speaking while addressing the media at the party secretariat today, PF vice president Given Lubinda described the Speaker’s ruling as nonsensical.

Lubinda argued that the speaker is only mandated to chair meetings in the National Assembly as opposed to interpreting the Law.

He further argued that the said seats can only be declared vacant upon a final determination by the Constitutional Court.

He cited a number of cases where Members of Parliament continued serving after their seats were nullified because they had appealed in the Constitutional Court. He said:

This matter was not coming for the first time. Numerous members whose seats were nullified in the past continued serving awaiting determination from the concourt. Numerous cases can be cited. She should have been informed that Matibini dealt with a similar matter in the case of GBM.

Madam Speaker should be quickly reminded that her role is to chair meetings of the legislature whose functions are limited to legislating not interpreting the law. It’s authority ends at legislating . . . If a gentleman who was a judge was told by his fellow judges to stop interpreting the law, can a speaker who has never been a judge be given more powers?

He blamed President Hakainde Hichilema for appointing the latter as a speaker saying how could a person of the speaker’s experience, “highly talked about by her appointing authority” make such a mistake.

Lubinda told the nine PF MPs whose seats are nullified to not wait to be vindicated but instead vindicate themselves.

He instructed them to be in parliament despite the speaker’s ruling which he said was unconstitutional.