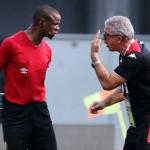 A Group F Africa Cup of Nations (AFCON) match between Tunisia and Mali degenerated into a farce after it was prematurely ended by the referee, not once, but twice on Wednesday.

The Zambian official Janny Sikazwe angered Tunisian players and staff, by appearing to whistle for full-time in the 86th minute.

Sikazwe then ordered play to resume, but then again blew the whistle to end the match after 89 minutes and 47 seconds.

Mali were leading 1-0  through a penalty scored by Ibrahima Koné on 48 minutes but a man down after El Bilal Toure was red-carded in the 87th minute.

Furious staff from Tunisia rushed towards the referee and stewards had to escort Sikazwe and his assistants off the pitch.

Efforts were made to restart the match from the 89th minute, 40 minutes after the controversy began.

However, Tunisia refused to return to the pitch, and Mali, who had come out again, were declared the winners and Sikazwe ended the game for a third time.

Media reports in Tunisia suggest that the country’s football association has filed an official complaint to the Confederation of African Football (CAF) about the refereeing performance.

Tunisia has also requested for the match to be replayed. Tunisia’s coach, Mondher Kebaier, said:

The players were taking ice baths for 35 minutes before they were called back out again.I’ve been coaching for a long time never seen anything like it.

The referee’s decision is inexplicable; I can’t understand how he reached it. We’ll see what comes of it.

He gave them enough time to equaliser so he made a decision by ending e match.. Those Arabs claim that they are not Africans,so they should feel it..e referee should have ended it in the 60mins

US$200.00 Harare
Stranger From the Forest 5 months ago

PROBABLY SOMEONE HAD TEMPERED WITH THE REF'S WATCH & PUT IT FIVE MINUTES AHEAD, RESULTING IN THE MATCH ENDING IN THE 85th MINUTE OR THE REFEREE HAS HIS OWN REASON WHY HE DID THAT. WE DEFINITELY NEED AN EXPLANATION FROM HIM. WE'VE NEVER WITNESSED SUCH DRAMA.

A refree's desition is final

SOME OUR COLLEAGUES ARE SUGGESTING THAT THE REFEREE PERHAPS NEEDED TO VISIT THE TOILET. THAT IS CHARTERED FOR. THERE IS A FOURTH REFEREE. HE SHOULD HAVE TAKEN OVER THE DUTIES WHILE THE REFEREE VISITED THE TOILET.

THE PUNISHMENT I FORESEE GIVEN TO THE REFEREE IS THAT THE RESULTS OF THE GAME WILL STAND, THE REFEREE SENT BACK TO ZAMBIA AND SUSPENDED FROM REFERRING FOR A NUMBER OF YEARS.

EVERY GAME OF SPORTS HAS GOT RULES WHICH APPLY TO IT. IN FOOTBALL ONE OF THE RULES SAY THAT THE REFEREE'S DECISION IS FINAL.

IN THIS CASE MALI CANNOT BE PUNISHED BY ORDERING A REPLAY. IF THE REFEREE MADE A MISTAKE AS HE CLEARLY DID, WILL BE PUNISHED HIMSELF, NOT MALI.

WE WILL SEE WHAT AFCON ADMINISTRATORS ARE GOING TO DECIDE.

That wasn't a decision buh a bizarre incident by the referee..Caf can order a replay or anything that will serve as justice

I think the reason for ending the match prematurely is attributed to referee's desperation to relief himself. I cannot rule out "manyoka" in this instance. Zvanga zvarema referee akawona kuti 7 minutes additional time was going to be too long a time until he gets to his next destination. We all know how this crazy "human jelly" behaves - not even a tightly inserted plug is capable of withstanding the pressure associated with this explosive "human jelly". The referee had no choice, but to blow the final whistle on 89mins & 47secs. The possible 7 mins additional time - golden from Tunians' perspective - meant nothing to the toilet-bound Zambian referee !! Safety first.... Destination : " Gents"

He is from our next door that is what we do here in southenAfrica get used to it Arab boys yes now we took it to the high level.. kukona kuno tiri maZANU munoti filler chete patinosvika isu masouthen africans

The referee was drunk